Rosemaling, the decorative folk painting of Norway, began in the low-land areas of eastern Norway about 1750.  Persons who rosemaled for their livelihood would not have been land owners but poor, city dwellers. After being trained within a “guild” they would travel from county to county painting churches and/or the homes of the wealthy for a commission of either money or merely room and board. Thus rosemaling was carried over the mountains and toward Norway’s western coast.The term rosemaling means Norwegian decorative painting.

Upon their exposure to rosemaling, rural folk would often imitate this folk art. Not having been taught in an urban guild, the amateur became spontaneous and expressive in his work on smaller objects such as drinking vessels and boxes.

Norwegian rosemaling continued its westward migration all the way to America. Emigration was heavy from some of the areas where rosemaling was well established. Travelers packed beautifully rosemaled trunks to make their journey across the Atlantic.

Rosemaling experienced it’s revival in America in the 20th century when Norwegian-Americans gave attention to the painted trunks and other objects brought to America by their ancestors.  Per Lysne, who was born in Norway and learned to rosemal there, is credited with inspiring this revival. He came to America in the early 20th Century. When business slowed during the Depression he began to rosemal again and American rosemaling was born. 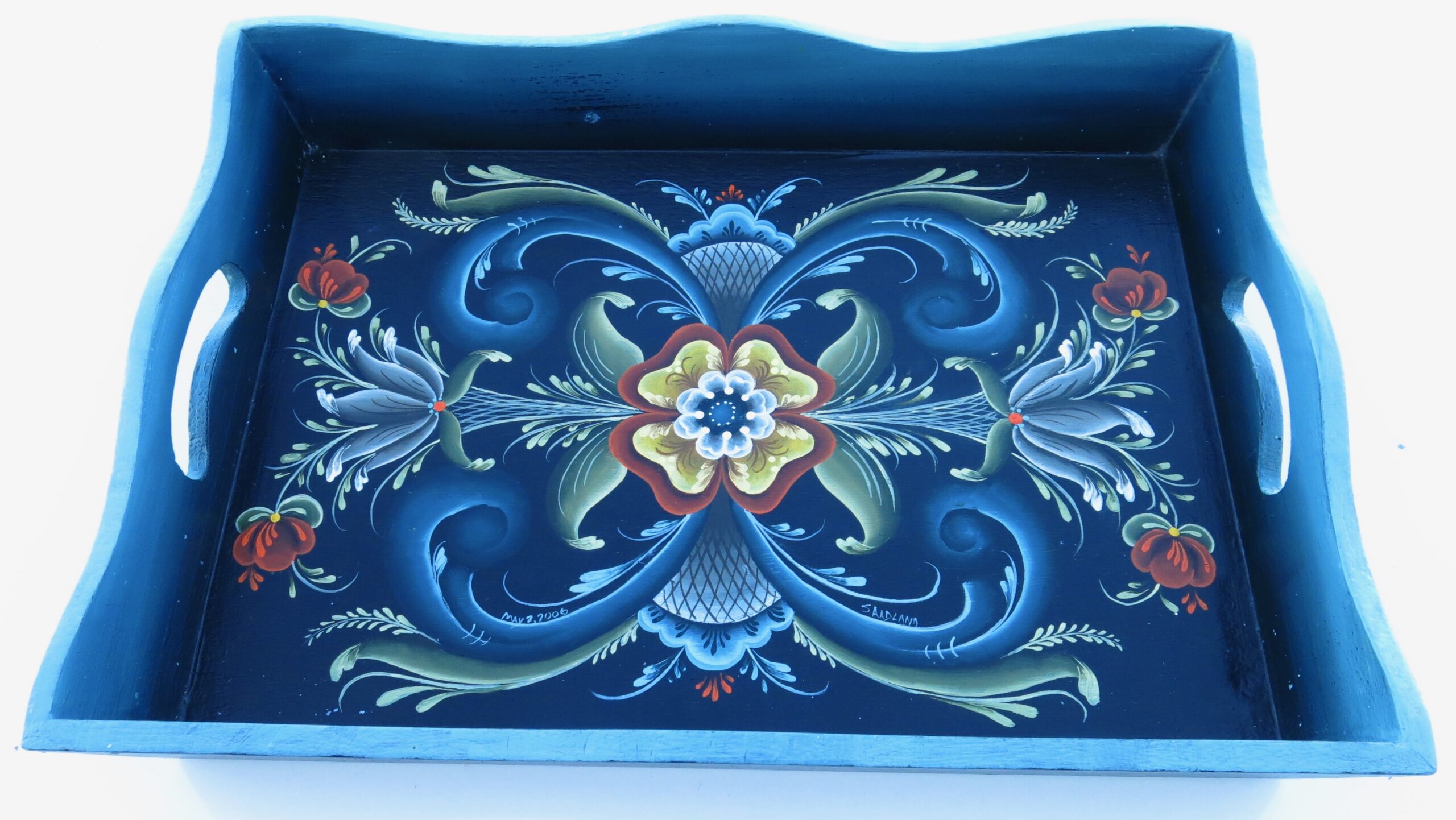 Chip carving is a style of woodcarving in which knives are used to remove selected chips of wood from the project in a single piece. Patterns can be free-form style or geometrically based with figures, such as triangles, circles, simple lines, and curves.

You’ve probably seen this style of carving on wooden plates, bowls, and boxes. Chip carving can be applied to a limitless number of mediums.

Basswood seems to be the wood of choice, as it is the almost perfect carving wood. It fits chip carving very well, too. Butternut is also a universally accepted carving wood and chip carvers use it quite a bit as well.

Just like other areas of carving, chip carving features a lot of knife work. Actually almost all chip carving is done with two to three knives (cutting knife (large & small) and the stab knife).

Chip carving is an expressive art form that has unlimited applications. Chip carving can be the main focus of a piece or it can be used as an accent. It is easy to find the needed tools and is inexpensive to begin. 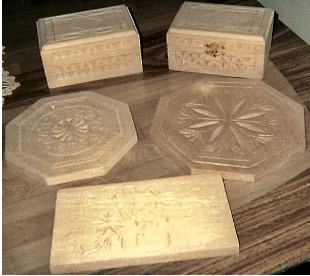 Hardanger Embroidery has been named after the Norwegian Hardangerfjord. Hardanger or “Hardangersom” (sometimes called Whitework embroidery) is an embroidery technique using satin stitches, cut work, needle weaving and fill stitches. It is traditionally worked with white thread on white even-weave cloth, using counted thread & drawn thread work techniques.  Before an area is cut it first needs to be surrounded by kloster blocks or a border of satin stitches, which hold the fabric threads in place. The fabric threads are then cut as required and carefully pulled out.

It is difficult to point to the exact date, when Hardanger Embroidery has first appeared. It is assumed that it origins from the Orient, in Persia in the 7th century. In the period between 1650 – 1850 Hardangersom (meaning work from Hardanger area) flourished in Norway. Around 1790, a busy trading exchange took place between Italy & Norway. The precious and exquisite embroideries were highly sought after and expensive. To ensure that all people could afford this beautiful embroidery, a new type of embroidery emerged in Norway from the original technique. It was called “Norwegian Drawn Thread Work”, and later “Hardangersom”, which means “Work from the Hardanger Region”.Â

It was embroidered on Linen, and the people adorned their Norwegian traditional costumes, mainly aprons and blouses, named “Bunad” with Hardanger. The original “Norwegian Drawn Thread Work” is a direct modification from Retically Lace, in Rindalen in Nordmore (Norway) around 1790. This Italian type of embroidery originated from double drawn thread embroidery using geometrical motifs, which looked similar to original Hardanger Embroidery.

Many Scandinavians immigrated to America during the years between 1840 and 1920. With them they took their knowledge about this embroidery technique and made sure it crossed the seas once again. It became silent during the time of WW1 and WW2. Around 1970 the embroidery experienced revival. 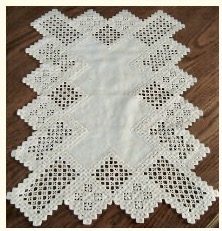 One theory of how knitting came to Norway was through Denmark. In graves dated back to the 15th century, knitting remains were found, like garments.

According to customs records, Bergen in Norway was a harbor for importing luxury items such as embroidered and knitted items.

Historical accounts have noted that it was an activity associated with the lower/poorer classes.

Eventually, as time went on, knitting became more popular. By the end of the 16th century, many people studied knitting, to have a useful skill to create income.

Scandinavians Arne Nerjordet and Carlos Zachrisson are highly regarded designers, textile artists and authors. They are best known for their original, colourful and visually striking designs as well as their books. Their work is highly influenced by their Scandinavian background and their everyday life in rural Norway. They work under their artist name ARNE & CARLOS, which they established in 2001. 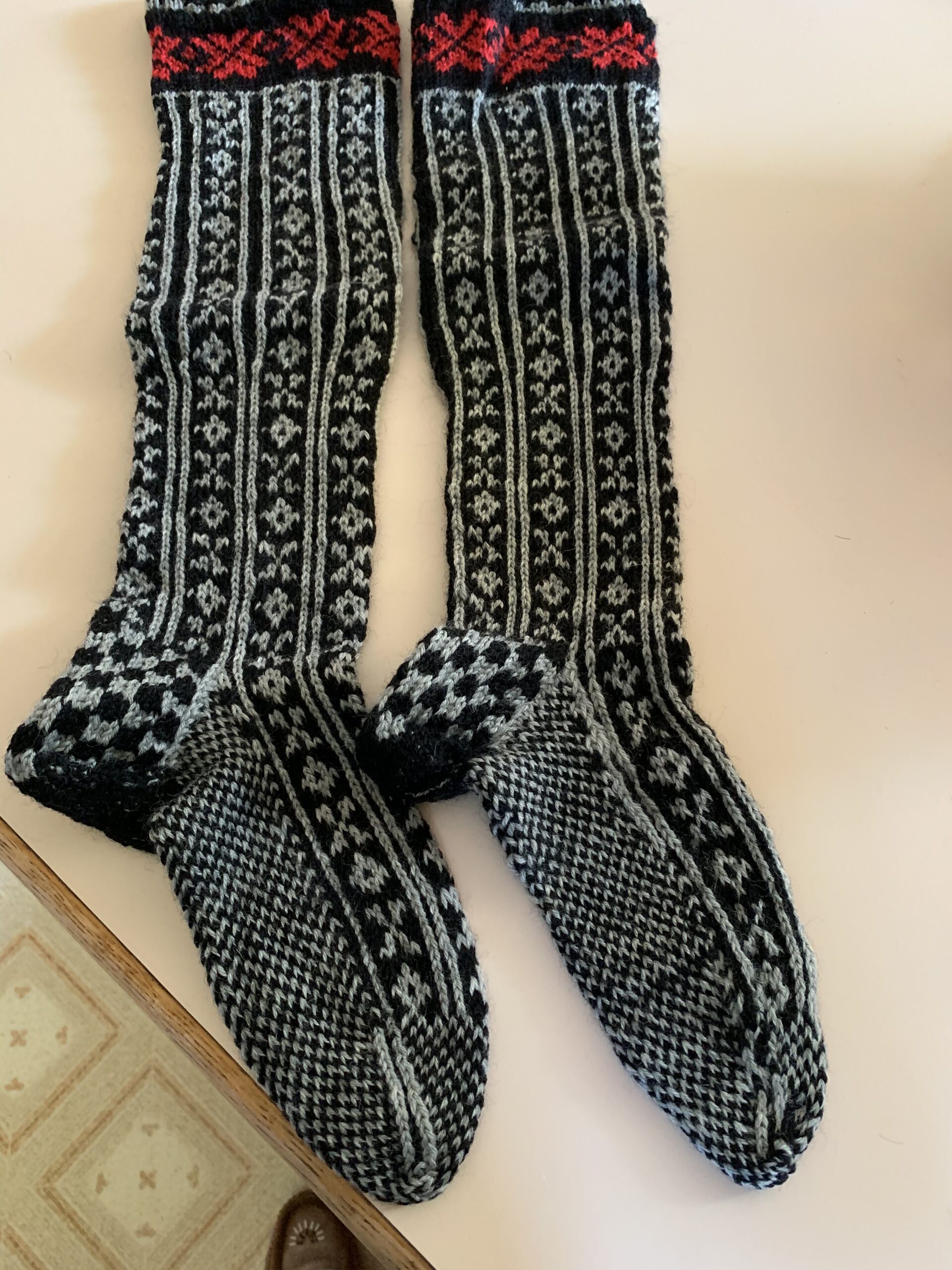